This past week in BUCS, it would be an emotional last day for Westminster Basketball. Our seniors would play their final game for the Dragons at Harrow Sports Hall, and Westminster 1st would finish their incredible league campaign win or lose, as the BUCS Division 2 Champions!

Westminster 1st would face league rivals and contenders Essex 2nd for the third and final team this season. The Dragons had just come off a dominating 40-point BUCS Cup Semi-Final winning performance against Kent 1st. Westminster 1st would look to go into this game to achieve “the perfect” 10-0 season in the league, last reached coincidentally enough by Essex 1st in BUCS 2B 2014-15 campaign.

Essex 2nd bounced back last week, after the BUCS Cup exit at the hands of the Dragons, with a confident 85-72 win against LSBU 1st at home – to avenge the away loss to them at the start of the year. Despite this game not affecting the final league outcome; the Blades came with nine players strong ready to give it all.

Westminster 1st made a slight adjustment to the line-up, giving first-year Guillermo Crespo his second BUCS start of the season, and also welcoming energy defensive guard Philip Hambe-Manu and center Carlos Javier to the squad.

Unlike previous outings against Essex 2nd, Westminster 1st came out the blocks, taking a 26-12 lead going into the second quarter. The Blades missing key point guards, had an awful first half, turning over the ball 20 times (41 total TO in the game) and shooting 11% from 3PT-FG (1-9).

The game was sluggish from both sides, with the Dragons turning over the ball a total 23 times. However, the Dragons capitalised on the Blades errors, with 29 steals as a team and sharing the ball as a whole effectively with 24 assists.

Westminster controlled each quarter and pulled away slowly, as Essex Blades lacked the energy and strength to compete they had in previous outings against the Dragons.

The final score at the Dragons Den ended 93-57, handing Essex 2nd their largest loss of the season and completing the perfect 10-0 season! 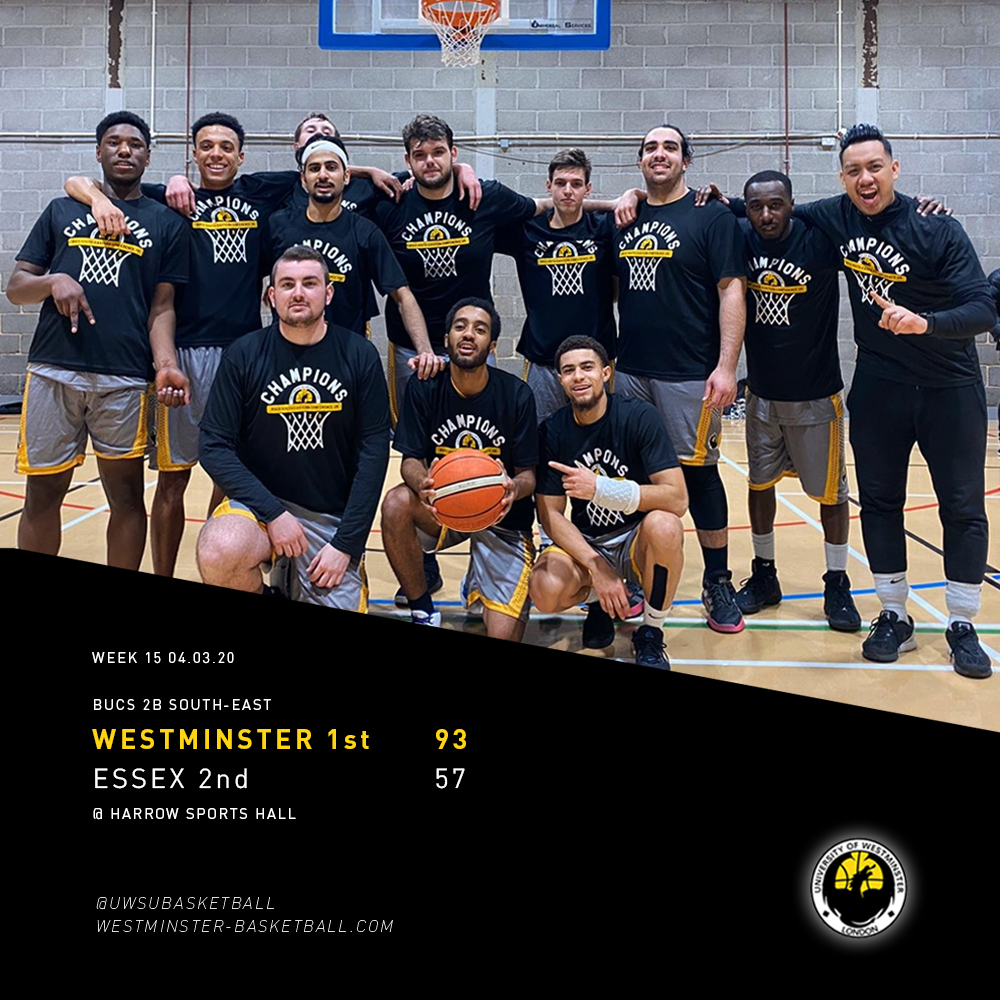 Thank you to our sponsors Rileys Haymarkets for providing the team with Champions shirts!

This home game was the last for seniors Tyree Blake-Bailey and Thomas Nahum, who will both be graduating in the summer. French forward Thomas Nahum has been a trusty servant for the Dragons, winning MVP 2nd Team honours in 2018-19 and finally seeing the hard work and effort rewarded by helping the 1st Team this season, including a game-winning free throw against Kings College 1st!

Captain Tyree Blake-Bailey (in main picture), transferred from American NAIA Programme Webber Athletics in 2017, has spent three years with the 1st Team, winning two championships along the way (2017-18, BUCS Division 3B & 2019-20, BUCS Division 2B). Athletic and versatile, Tyree Blake-Bailey has played nearly all positions for Coach Clive Castillo in his three years as a Dragon, also leading the team on and off the court in his last two years as captain.

Elite-Athlete guard Afrasyab Khail finished top scorer with 35 points, and impressive 10-10 (100%) from the FT line. The second-year guard also recorded 5 assists and 3 steals in just over 30 minutes of play.

Center Carlos Javier impressed in his return, in less than 10 minutes of play the Spanish Center grabbed 7 rebounds and contributed 4 points. American Guard Mylo Mitchell totalled 23 points and tallied 8 assists, along with 4 steals.

Defense was more the energiser for the Dragons this game as the outside shooting wasn’t consistent. Starter Louis Roberts proves his consistency on the boards with 9 rebounds and 4 steals, and energy guard Philip Hambe-Manu came off the bench to provide 8 steals and 3 assists.

“To win the league is one, but to achieve the perfect season, is incredible.
I couldn’t be more proud of the team, they deserve all the praise.”
Coach Clive Castillo

Come down to the BUCS Cup Final and support the Dragons as they aim to complete the BUCS double!

Westminster 1st will take on St Mary’s University 1st, two teams both in the BUCS Division 2 South-Eastern Conference but in different pools. Interestingly the teams have only ever faced once, this was the BUCS Cup Last 32 in 2014 – St Mary’s took the win on that encounter 73-58 over the Dragons.

🐲 Westminster 2nd (3-7) After a slow and disappointing 1st half, Westminster 2nd found themselves down 20 points going into the second half against an organised Goldsmith 1st. However, an effective full court-press, defensive pressure and key buckets saw Westminster 2nd pull within single-digits in the last two minutes of the 4th Quarter against Goldsmith.

Guard Hamse Adan provided the crowd with an excellent 3-point play with clear contact, but no foul call down the wire. A disappointing loss for Coach Joshua Klein and the Dragons; nevertheless, the team remained positive and their heads high. Very proud our seniors in the line-up including Sebastien Amadeo, Ismael Temimi and Hamse Adan are all graduating this summer. 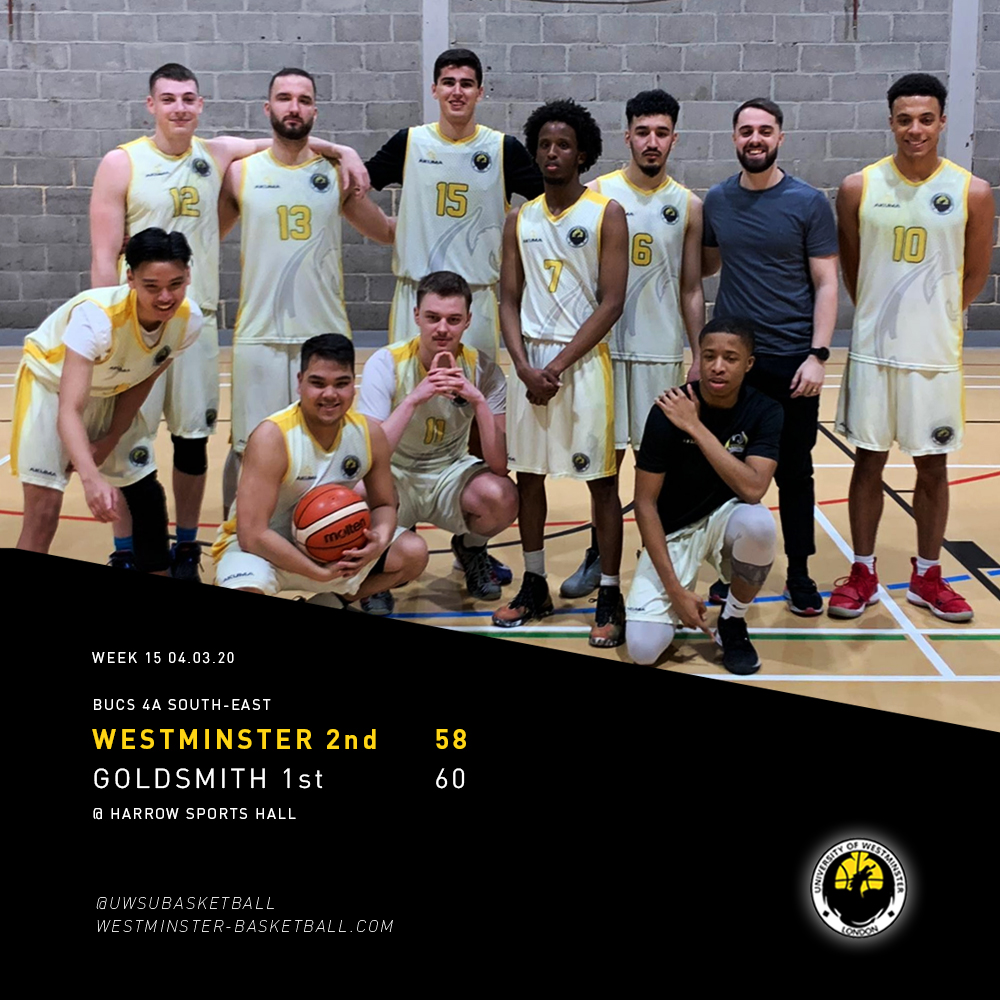 🐲 Westminster Dragons (6-3) The home game scheduled for this weekend against Cardinals has now been rescheduled for the Sunday 15th March 2020. The Dragons have five remaining games in the London Metropolitan Basketball League (LMBL) Men’s D2 this season, a positive result in all games will definitely see D1 promotion for Westminster.