It was Westminster’s biggest game of the season thus far; the Dragons travelled to Colchester to face Essex 2nd in a battle of the undefeated in BUCS 2B. Whoever came out victorious in this pivotal match-up would be in pole position for promotion going into 2020. 🐲🔥

The last time the Dragon travelled to Essex Sports Arena, was 2017-18, the season Westminster managed to gain promotion. It was similar circumstances for both teams, who have the same goals and both have been confidently winning league games in the build-up.

The stage was set for the two teams in Essex Sports Arena, such an impressive venue – professional facilities boasting bleachers full of fans (Home of the Essex Rebels, Men’s NBL D2 & D3 and also a successful WBBL franchise).

Essex Blades II came out the game firing. Defensive pressure and successful stops saw the Blades steam to an 18-4 run to start the game, led by guard Benedict Butawan’s 4-4 shooting from 3-PT. Westminster Coach Clive Castillo called a timeout for the Dragons to recollect and settle in, which proved useful as Westminster adjusted to the defensive pressure and found their offense. 1st Quarter ended 28-28.

The 2nd Quarters have proved Westminster’s strongest this season, and the Dragons continued this form. In the lowest-scoring quarter, the Dragons limited Essex to 14 points, while going on a run to go into the half 10 points up, 52-42. A positive spark off the bench was rookie Louis Roberts (Versatile guard from High School Trinity Basketball Academy), who recently joined Westminster and impressed on his debut for the 1st Team. Louis provided effective rebounding and solid points off the bench for the Dragons.

Westminster came out the half with more intent to build up the lead, the Blades reacted well and challenged them play by play. Essex Blades struggled defensively, getting into foul trouble early in quarters and allowing Westminster to slow the game and score from free throws. The Dragons shot a total of 36 FT in the game, scoring 32 (89%).

The 4th quarter was similar, despite late runs from Essex, the Dragons answered and managed to pull away for a vital 89-110 win on the road.

Guard Mylo Mitchell hit his second 50-point ball game, ending with 50 pts while contributing an impressive 9 assists, 7 steals and 5 rebounds. Captain Afrasyab Khalil carried the majority of the scoring load in the first half, finishing with a total 38 points and 5 assists, including an impressive 12-12 from the FT line. Both guards combined for an incredible 88 points.

The win puts Westminster 5-0 completing the first round of the robin, with one more league game left in 2019 before the Christmas break. This is the best record Westminster has ever started within history, as the Dragons are aiming for promotion to the BUCS 1st Division – a level Westminster has never reached.

Notes – Dragons 3rd consecutive 100+ points scored in a game in all competitions, the game completes an undefeated November in both leagues for Westminster (BUCS 2B & LMBL D2)

Shoutout to our sponsors Rileys Haymarket for our brand new warmers for the season!

Other Dragons results from #BUCSWednesday –

🐲 Westminster 2nd put up a great challenge against the league leaders Goldsmith 1st, unfortunately falling short 65-53. Lots of positives and learning to take from this result as the team look to build on from every result. 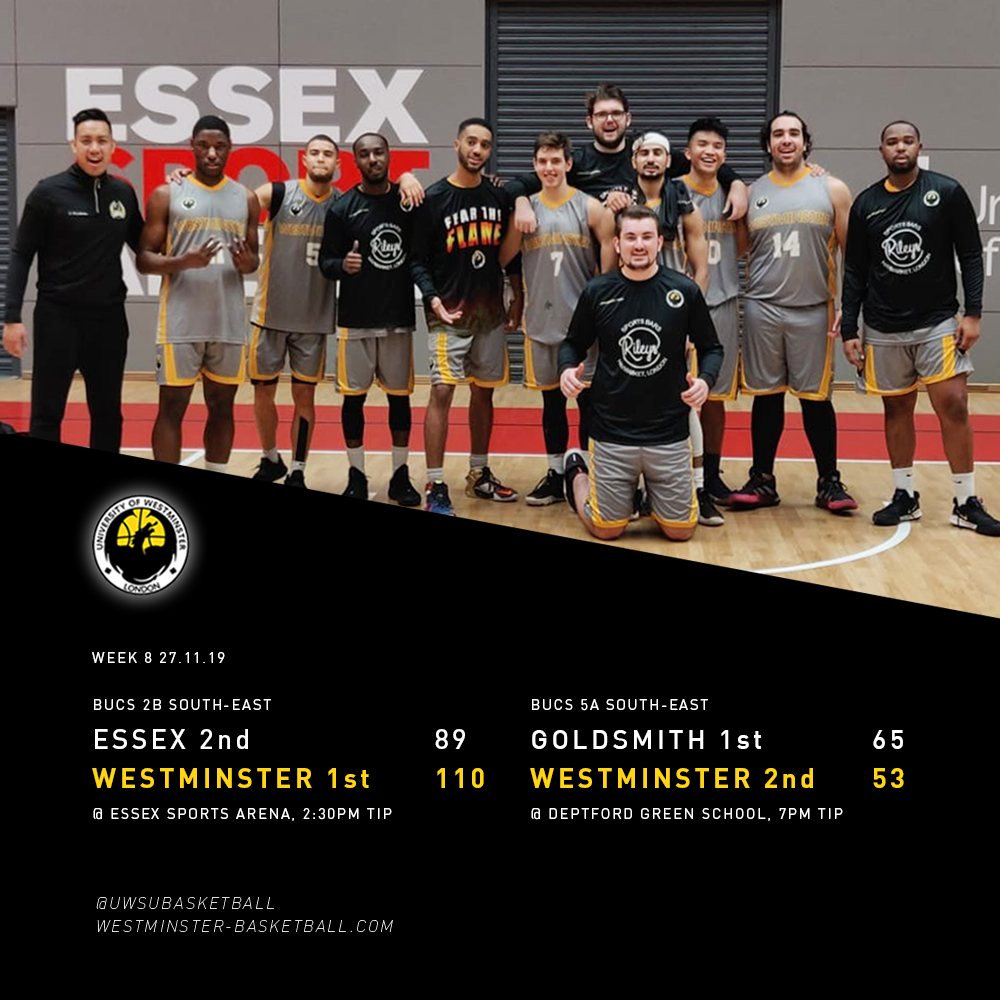