The final stage was set in Twickenham this past Wednesday. A showdown with two of the top teams in the BUCS South Eastern Conference Division 2, fighting to be crowned the BUCS Conference Cup Champions 2020!

Westminster 1st enjoyed their best-ever league campaign, dominating the BUCS South Eastern Conference 2B with an undefeated 10-0 record – gaining promotion for the first time in programme history to BUCS Division 1 for 2020-21.

The unbelievable run saw impressive wins against Essex 2nd @ Essex Sports Arena, and hard-fought victories over Kings College 1st and Imperial 1st on the road. The Dragons have drawn attention all over UK with their fast-pace, high scoring style of play, with elite athlete guards Afrasyab Khalil and Mylo Mitchell sparking the scoreboards week-in week-out.

St Mary’s 1st, who are in BUCS South-Eastern Conference 2A, have had mix fortunes this season. In a three-horse race for the BUCS 2A Championship, St Mary’s are currently 3rd with a 7-2 record with one game remaining. A win would mean a tied winning record with Brighton 1st and Brunel 2nd (8-2).

Nevertheless, Brighton 1st would lead the division on head-to-head comparisons and ultimately be promoted to Division 1 with Westminster.

St Mary’s have enjoyed a successful cup run with dominating performances in previous rounds. University of West London 1st provided the Saints with the toughest challenge, falling short 85-81 in the semi-finals.

Westminster 1st would welcome back VP of Activities Gerald Aguilar, who had missed two previous games. Also, Center Arian Ahmetaj recovered from his eye injury during the final league game against Essex 2nd to be available for the Dragons.

The Dragons came with full support, as a travel coach of 55+ took all players and fans (parents, students, friends) from the University of Westminster Marylebone Campus to Sport St Mary in Twickenham. Shout out to the fellow Dragons teams and societies, Men’s Basketball team members, UWSU Swimming, UWSU Volleyball, UWSU Cheer and members of the University of Westminster Students’ Union for making the trip to finals day!

The Dragons came out with more energy than the Saints, scoring the first bucket of the game through layup from guard Afrasyab Khalil. St Mary’s bounced back, with strong defense and efficient transition points ultimately taking the first quarter 20-19.

The Dragons didn’t necessarily turnover the ball often or play poorly, Westminster 1st just struggled to score the ball – shooting a total 32% (9-28) from 2PT-FG and 2-15 from 3PT-FG (13%) in the first half. 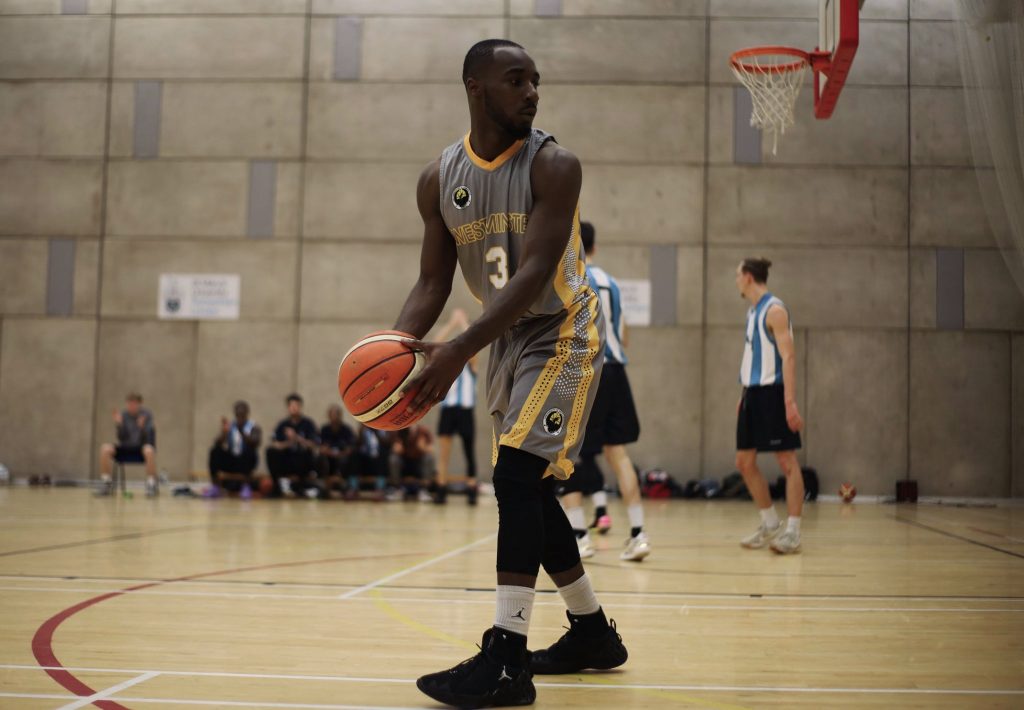 Additionally, free throws were a problem for Westminster 1st. The Dragons adjusted to be more aggressive and direct as St Mary’s kept raking up the fouls, yet despite getting to the line, Westminster only converted 37% from free throws (7-19) in the first half.

St Mary’s 1st was more clinical in the opening half, led by Richmond Knights National League guard Ben Davidson who had 10 points, including shooting 2-3 from 3PT-FG.

Westminster found themselves down 7 points in the first half, 38-31 – a position they have rarely been in all BUCS season.

Westminster recuperated in the locker room and looked to start the 3rd quarter with more intent, as forward Guillermo Crespo checked in and scored the first two points for the Dragons. However, St Mary’s 1st had different ideas.

The Saints through a series of excellent defense, and great transition plays stormed to a 16 point lead (49-33), forcing Westminster head coach Coach Clive Castillo to a timeout.

American guard Mylo Mitchell responded after the timeout with a step-back 3PT FG, but St Mary’s guard Khalil Kennou replied straight after with a three-point of his own (3-9 3PT FG total in the game).

Westminster 1st managed to chip away, continually attacking St.Mary’s and getting to the FT line. However, the poor FT shooting continued, which made it slower and challenging for the Dragons to get back into the game.

A significant turning point in the game when St Mary’s Sports Scholar and Richmond Knights player Valentino Spina, pulled down guard Mylo Mitchell after turning over the ball at half-court. Spina was given an unsportsmanlike foul, and the Dragons converted the two free-throws and retrieved possession. 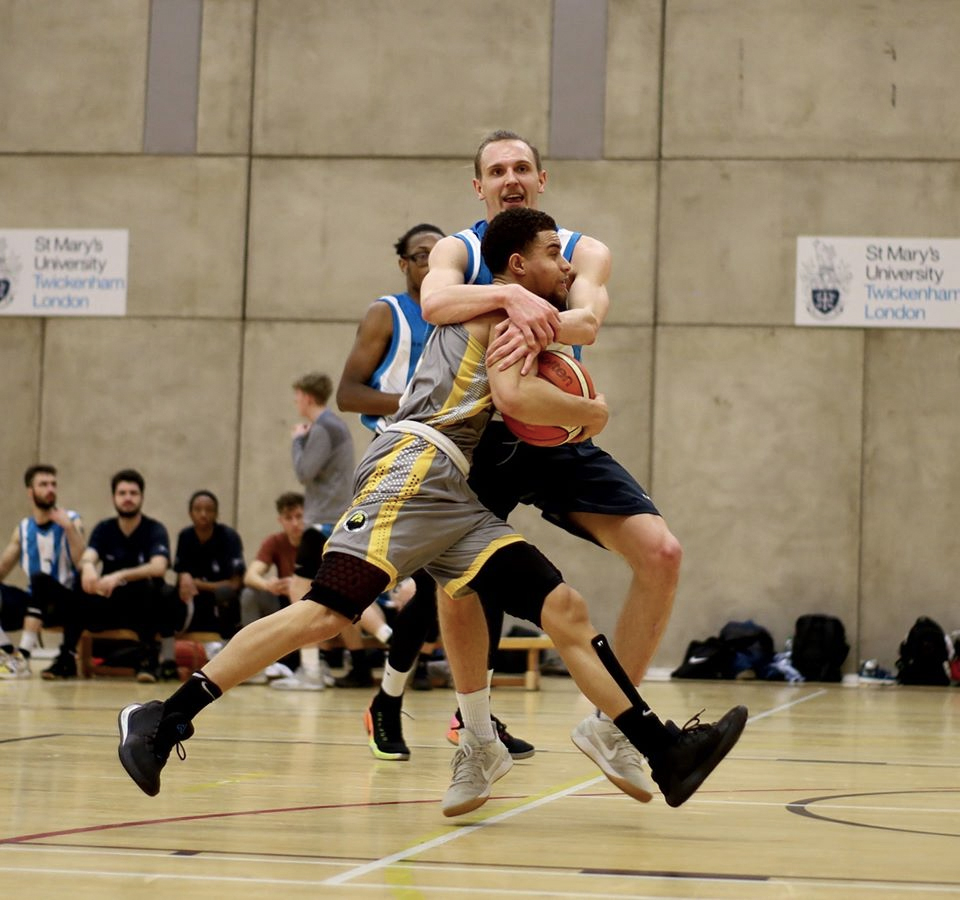 The next critical play, Westminster hit a power layup through rookie Louis Roberts to bring the Dragons within 5 points (52-47). The roar from the Dragons fans became louder and louder, and the Saints seemed a little rattled.

With the Saints on the backfoot, Westminster pounced, storming to a 10-0 run to end the 3rd quarter, key 3PT-FGs from Afrasyab Khalil and Mylo Mitchell assisting the Dragons to take a five-point lead into the final quarter (57-52). The Dragons ended the quarter with an emphatic 24-3 run with 21 unanswered points. What a turnaround!

The Dragons found themselves in a familiar position they’ve been in all season – in the lead to start the 4th. St Mary’s combo guard Denis Mesic proved a handful, scoring a majority of his 22 points in the 4th quarter, as he forced the game to the Dragons.

Despite a late rally from St.Mary’s, it was eventually Westminster’s time to shine in a game they struggled offensively. Guard Orestas Vasiliauskas came alive in the fourth quarter, scoring 9 crucial 4th quarter points (total 16 points and 7 rebounds) including a corner three-ball and two game-winning layups.

Westminster 1st would hold out for the 69-73 win, claiming the university’s first-ever BUCS South-Eastern Conference Cup Championship and complete, the impressive undefeated BUCS season in all competitions!

Scenes involved another fan court invasion as all supporters, friends and families joined the team celebrations in the middle of the court – in a hard-fought and well deserved Dragons win!

This achievement is the first-ever BUCS Cup win for any of the University of Westminster Dragons sports teams, history made!

“I told the team when we were down, ‘I don’t care about the score. We can get it back. We can go on runs. Just play defense, focus on stops. We’ll be there. Trust me.’ And it happened. I couldn’t be more proud; they had their backs against the wall, with all the pressures and challenges of the game. They handled it like champions.“
Clive Castillo, Westminster Head Coach 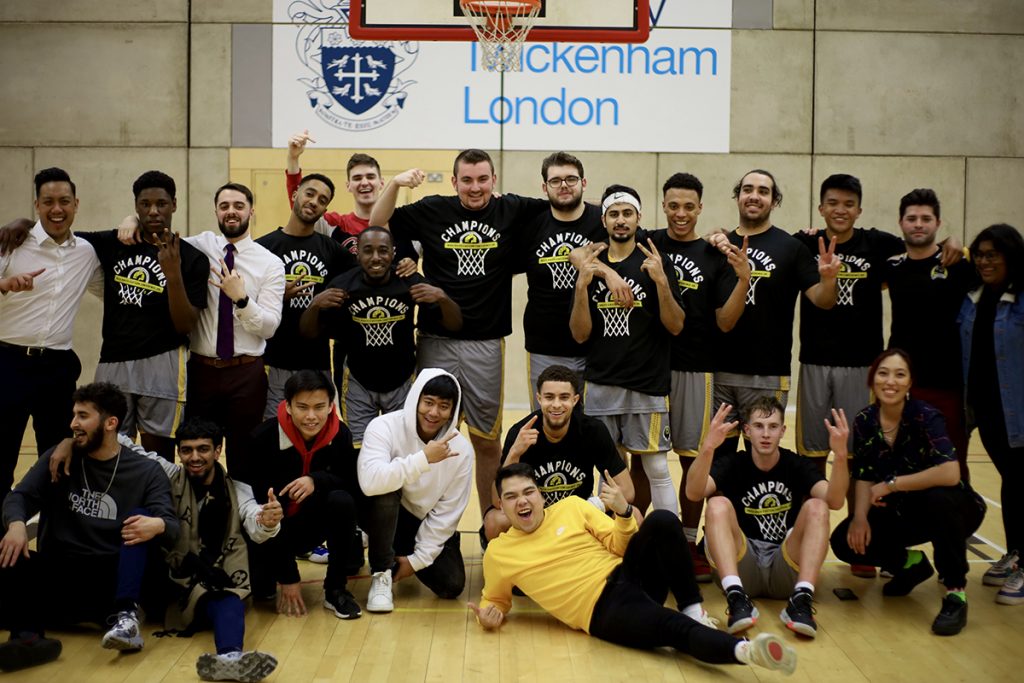 Finals MVP honours went to American guard Mylo Mitchell. The Miami native finished with 30 points, 7 assists, 5 rebounds and 4 steals in 40 minutes of play. The senior guard displayed leadership and vital experience, coming up with pivotal and consecutive game-winning plays in the 4th quarter.

Rookie Louis Roberts earned his most minutes this season (37) and deservedly so – with an effective 12 rebounds, 9 points, along with 6 steals. Forward Thomas Nahum contributed with 5 rebounds off the bench.

🐲 Extra shoutout to all Dragons supporters who came down for the final, also everyone watching through our IG online! You are the true 6th man, you are the reason why we represent Westminster to the best of our abilities. LET’S GO DRAGONS! 🐲

🐲 Thank you to the University of Westminster Students’ Union for their continued support throughout the season! Supporting the Dragons family not just basketball on and off the court 🐲

🐲 To our sponsors Rileys Haymarket for providing us CHAMPIONS T-Shirts, and the supplier Crooked Hill Customs for delivering on short-notice! 🐲