Westminster 1st returned to BUCS this past Wednesday with another chance to boost promotion dreams, with a difficult 2020 opener away against Imperial 1st.

Both teams met in October, both sides looking a lot different. Westminster 1st took the first W in a comfortable 117-75 home victory. Since the two teams faced off a few months ago, Westminster 1st has remained undefeated in the league; and also advancing to the BUCS Cup Quarter-Final.

Imperial 1st has sadly struggled despite positive performances; a lack of consistent player numbers and closing out games have seen the team fall short, falling to a 1-5 record.

Westminster 1st was proud to reintroduce guard Orestas Vasiliauskas back into the line-up, who suffered a severe elbow injury before Christmas break. The rookie, who returned sooner than expected, was rewarded his second start of the season. The Dragons also saw the return of Indian center Paras Maan to the roster.

The Dragons started the game dedicating the first possession of the game to NBA Star Kobe Bryant, who sadly passed away this week. Westminster Center Carlos Javier won the tip; the ball found its way to point guard Afrasyab Khalil who ran he 24 shot clock. Imperial College paid their respects to the NBA legend by replying with an 8-second backcourt violation (24 and 8).

“It was Afra’s idea. He ran it by me a few days before the game. The news hit us all hard; as one of the leaders of the team I’m proud he suggested it. The impact Kobe had in the world, not just in basketball, but outside the game is immeasurable.”
Coach Clive Castillo

The Dragons were unfortunately sluggish in the first half; the performance included sloppy turnovers from unforced errors with poor outside shooting. However, despite the average display, Westminster 1st found themselves up 34-28 going into the 2nd half.

The second half Dragons picked up the tempo, a quick-fire start to the 3rd quarter including five straight points from guard Fernando Roman gave Dragons a 10-point cushion. However, as Imperial 1st continued to do throughout the game, refused to be pushed and showed resilience to play through the quick runs of Westminster and ended the 3rd quarter only 7 points down.

Despite a late scare, Westminster controlled the fourth quarter. Imperial 1st hit a quick 7 straight points in the last minute of the game including a fantastic half-court 3 pointer to narrow the game within one possession. But the Dragons proved the experience and composure were enough to take the win, and another step closer to promotion.

American guard Mylo Mitchell was Westminster’s leading scorer, contributing all round with 29 points (37% from FG), with 12 rebounds, 7 assists and 4 steals. It was a surprising rare off-day for Captain and Elite-Athlete Afrasyab Khalil, who shot 0-10 from 3PT FG, however still provided 14 points.

Guard Orestas Vasiluaskas impressed on his return to the line-up with 11 points and 5 rebounds, while Center Carlos Javier continues his impressive performances in 2020 with an awesome double-double of 13 points and 14 rebounds 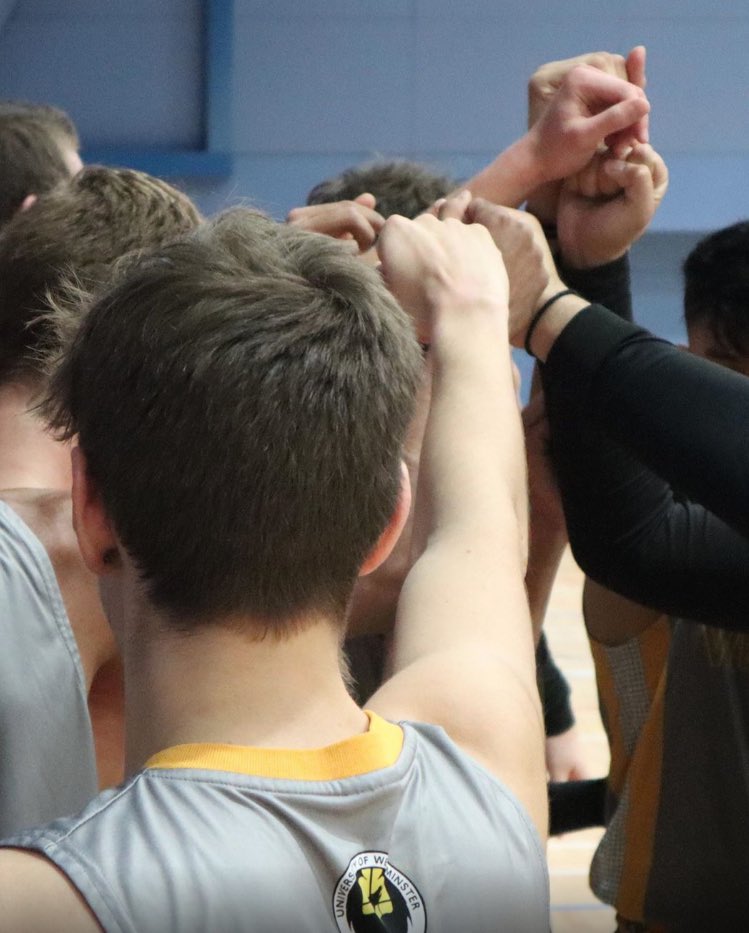 Westminster 2nd continue their mixed result season, starting 2020 on the 15.01.20 losing to Imperial 3rd away from home 69-63. However, the Dragons bounced back a week later defeating Imperial 3rd at the Dragons Den, 64-55. The team, however, fell short this week (BUCS Week 10) against a strong London Met side 81-56.

Westminster 2nd have three remaining games this season as they battle to stay up in BUCS South-Eastern Division 4.

Westminster 3rd lost to Essex 3rd 31-109 at Harrow Sports Hall this past Wednesday. The Dragons are still seeking their first win of the 2019-20, they currently are last in BUCS South-Eastern Division 5, with a record of 5-0 with one game remaining this season.