Westminster 1st went into the final week of BUCS 2019 with a 5-0 advantage in the South-Eastern Conference 2B, the best record the Dragons have ever achieved going into the second half of the season.

They faced London South Bank University (LSBU) 1st, a team 2-1 in the league but can’t seem to avoid the Dragons, having already faced Westminster twice this season (once in the BUCS Cup and a league game).

“This wouldn’t be an easy one” – 1st Team Head Coach Clive Castillo had stated before the game, despite Westminster beating LSBU 1st twice already this season, averaging a point difference of 49.5 for both games.

“LSBU adapt and improve with every game, that is basketball. They will be much more prepared when we play them away.” – Coach Clive

The prediction from Coach Clive Castillo seemed fair, and LSBU 1st proved they up for the challenge as they were energetic and fighting from the first tip @ The Thunderdome, Lewisham. Guard Afrasyab Khalil started the scoring for the Dragons with quick transition lay-ups, leading Westminster to a 27-20 lead going into the 2nd quarter. The Dragons soon found their rhythm to extend the lead to 11-points going into the break.

Foul trouble was an issue for both teams, as Westminster was only 8 players strong (with players out due to injuries), and the Dragons had to be extra careful not to have any players foul out. Unfortunately for LSBU 1st, three players end up fouling out before the end of the game.

LSBU 1st picked up the tempo in the second half, narrowing the gap and taking the lead early in the 4th quarter through good ball movement and defensive stops. However, energy from the Dragons bench provided by guard Philip Hambe-Manu (10 pts 7 reb) helped the Dragons with defensive stops, eventually going on scoring runs to take the lead and close out the game 61-78.

American guard Mylo Mitchell didn’t have his best shooting outing from 3PT (1-10 3PT FG%). However, it didn’t stop the guard scoring an impressive 33 points and adding 12 rebounds -recording his first ever double-double for Westminster. Captain Afrasyab Khalil also recorded an efficient double-double with 19 points and 10 rebounds. Starters Tyree Blake-Bailey (11pts 9 reb) and Fernando Roman (11 pts, 7reb and 6 asts) contributed effectively. It was also a pleasure to see captain and center Arian Ahmetaj get back into rhythm after a recent ankle injury.

The win now takes Westminster 1st top of the table (6-0) with 18 points. They have four remaining games left in the BUCS season, taking on Imperial 1st away @ Ethos Sports Centre on Wednesday 29th January 2019.

Westminster Dragons (LMBL Divison 2) 4-1 – After defeating BC Green White Boys in a record-breaking LMBL Divison 2 Men’s 177-90 win in late November, the Dragons have gone on to advance in the LMBL Plate. Westminster defeated LMBL Premiership veteran side Soar Sports Men 92-69 @ Harrow Sports Hall in early December to advance to the LMBL Plate Quarter-Finals. The Dragons were led by guards Mylo Mitchell (28 points) and Afrasyab Khalil (24 points) in a game which was closely contested till the mid-fourth quarter, until Westminster used a scoring momentum to pull away for the win.

Unfortunately, the Dragons finished 2019 with an LMBL Division 2 league loss to Erkenwald II on the road. An absolute poor second quarter saw Westminster only score 8 points from poor shooting, and rookie guard Orestas Vasilauskas fall to a dislocated shoulder.

Westminster ended up chasing Erkenwald II, falling behind double digits going into the second half. The Erks done a good job in closing the game, with bigs aggressively attacking the boards and guards hitting clutch threes to seal the win. A big learning experience for Westminster who suffered only their second loss of the season thus far (16-2). An impressive performance from rookie Forward Guillermo Crespo who helped the team offensively (8 points) and defensively down the stretch.

Westminster 2nd (BUCS 4A) 1-3 – Despite a late rally, Westminster 2nd couldn’t overcome league leaders Goldsmith 1st in their last game of 2019, losing 65-53 away from home. The Dragons showed more positivity, scoring, the most points they have away and challenging a tough Goldsmith team to the end. Westminster 2nd go into 2020 with the record of 1-3, upcoming must-win games for Coach Josh Klein and the 2nd Team in the new year to avoid the relegation battle.

Westminster 3rd (BUCS 5A) 0-4 –  Westminster 3rd Team put up a brave battle against UEL 4th losing the game 59-41 at the UEL Sports Dock in early December. Despite not winning a game this season (0-4), there is a motivation and encouragement within the camp as performances seem to improve after every game. Westminster 3rd has two games remaining left this season (Against Brunel 3rd and Essex 3rd), and the Dragons will be hungry for a win.

Thank you for all your support so far this season. We are proud you’re following our journey and do our utmost best to compete, work hard and represent the Dragons week-in week-out. Now time for a well-deserved winter break! Westminster Basketball wish you all a Happy Christmas and see you in 2020! 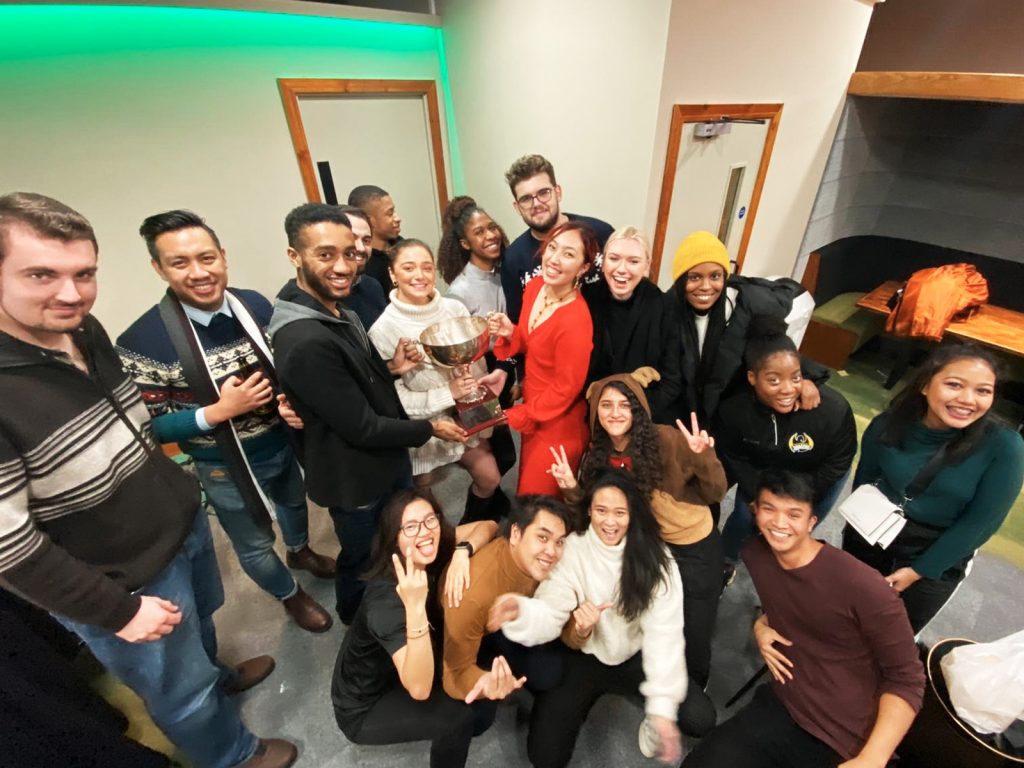 The team celebrate a Christmas gathering before the winter break @ The Hideway, Regent Street Westminster Campus