This past BUCS Wednesday would be a momentous occasion in the basketball programme history for the University of Westminster. A win in The Thunderdome against Kings College 1st would solidify the BUCS South-Eastern Conference 2B championship for the Dragons.

Kings College 1st has had a strong winning record at home; a recent memory; the Dragons fell to Kings last season at The Thunderdome 77-66. This season has been mix fortunes for Head Coach Ward Anders and his team, crucial recent wins away against Imperial 1st and at home vs LSBU 1st has given Kings breathing space from the relegation zone. Sadly, they’ve come off a disappointing Quarter-Final cup exit loss against the University of Kent 1st, the team, the Dragons, will face in the next round.

Westminster 1st will look to build what could be a perfect season for the Dragons, currently undefeated in all BUCS competition. A convincing BUCS Cup performance against league rivals Essex 2nd gives the Dragons confidence going into this match-up.

Both teams had every reason to win the game, Westminster looking to claim the title and Kings trying to secure their spot in Division 2 for next season – it’s all to play for.

With both teams bringing full support, it was an intense match-up from the tip. Both sides were trading baskets early, with rookie guard Orestas Vasiliauskas carrying the early scoring load for the Dragons, finishing the half leading all scorers with 13 points.

Westminster 1st controlled most of the 1st Quarter, until Kings surged on a scoring run. American Guard Benjamin Simon scored 4 of his 5 overall three-pointers in the game in the first half, stretching the Kings lead early in the 2nd Quarter. Kings Captain Tameem Sharafnabi provided needed energy and efficiency off the bench, including shooting back-to-back three-pointers. Kings College shot 7-13 in the 1st half from 3PT field goal (54%), going into the half with a 5-point lead.

With their backs against the wall, Westminster needed to find inspiration and creativity somewhere. With poor outside shooting from the team, Elite-athlete guard Afrasyab Khalil shifted more aggressively in the second half, getting to the free-throw line an overall 20 times in the game (17-20 FT, 85%).

Kings College 1st stretched the lead to as much as 10 in the 3rd. However, the Dragons continued to chip away steadily. Intense defence and effectively crashing rebounds led to open fast break opportunities for guards Mylo Mitchell and Afrasyab Khalil.

Due to the closeness of the game, emotions were running high, and the physicality of the game increased. A total of three total technical fouls given in the second half by the referees – one for Westminster (player dissent) and two for Kings College (Coach and Bench technical, dissent).

Under two minutes remaining in the game, an absolute all-out defensive effort from the Dragons led to Afrasyab Khalil being fouled on the fast break. With both teams in foul trouble, Khalil casually knocked down the two free-throws to tie the game 77-77. First time since the 1st Quarter, Westminster found themselves back in the game. Timeout Kings College.

Kings College 1st proceeded to take the ball to the frontcourt, excellent defensive pressure from Louis Roberts forced Kings College to shockingly overthrow the ball from the inbound to the backcourt and force a turnover. Instead of calling a timeout to draw a play, Westminster Coach Clive Castillo decided to let the Dragons play and follow the momentum.

With no score from Kings, Guard Afrasyab Khalil drove to the left, with the layup falling short, rookie Louis Roberts provided a crucial offensive rebound before being fouled to shoot two and a chance to give Westminster the lead for the first time since the 1st Quarter.

The fresher, unfortunately, missed both free throws but French senior Thomas Nahum delivered another offensive rebound (a total of 20 offensive rebounds for Westminster in the game), to get another chance to score. Solid defense from Kings forced VP of Activities Gerald Aguilar to miss a layup on his left.

Kings regained possession. Hot gunning American Guard Benjamin Simon cleared space through two screens to shoot an open look three-pointer, but with no luck, he would also get a second chance in the corner straight after but hitting the front rim. Dragons regain possession with just under 15 seconds.

Westminster Guard Afrasyab Khalil set up the play once crossing over to frontcourt, aggressively drove to the baseline collapsing the Kings College defense, dishing to a diving Thomas Nahum who gathered his steps as he fought off several defenders and went straight up – with the ball going in and a whistle blown. The referees decided to rule no basket, but two-three throws for the senior with just under 6 seconds remaining.

Forward Thomas Nahum would unbelievably bank the first free-throw (his only point in the game), with the ball circling the rim before dropping in, giving Westminster 1st a 77-78 lead. The second free-throw would bounce out, but crucial touches from Louis Roberts led to Thomas Nahum grabbing another offensive rebound before being fouled.

With only 4 seconds left in the game, the French senior would shockingly miss both. Kings College 1st would scramble for the defensive rebound; the ball eventually landing to Kings captain Tameem Sharafnabi who heaved from half court with no luck.

Dragons win a hard-fought game 77-78, claiming the BUCS South-Eastern Conference for the first time ever in programme history! Supports from UWSU Swimming, Volleyball and Women’s Basketball swarmed the court with Westminster to embrace a historic moment! 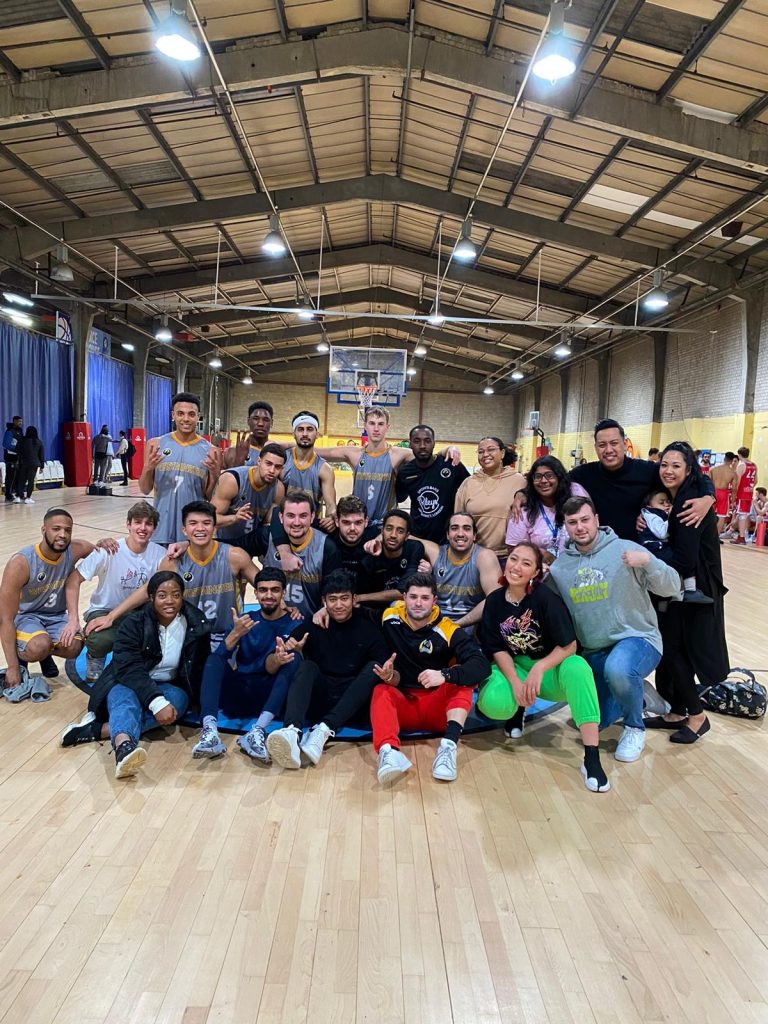 The win means Westminster 1st move to 9-0, claiming the title over rival chaser Essex 2nd, who has a 5-2 record. Both teams will face off in two weeks @ Harrow Sports Hall in Westminster’s last BUCS game of the season. However, even if the Dragons lose the game, the win against Kings means Westminster will still be 1st place on overall record and points.

“It’s hard to put into words. It’s a testament to the desire and work-ethic of the players, what they do week in week out. The tremendous support we’ve had this season, the home support at Harrow, and those who come out to our away games no matter how far. We are very thankful. Without everyone contributing, working together, and sticking together as a family. This wouldn’t be possible.”
Coach Clive Castillo 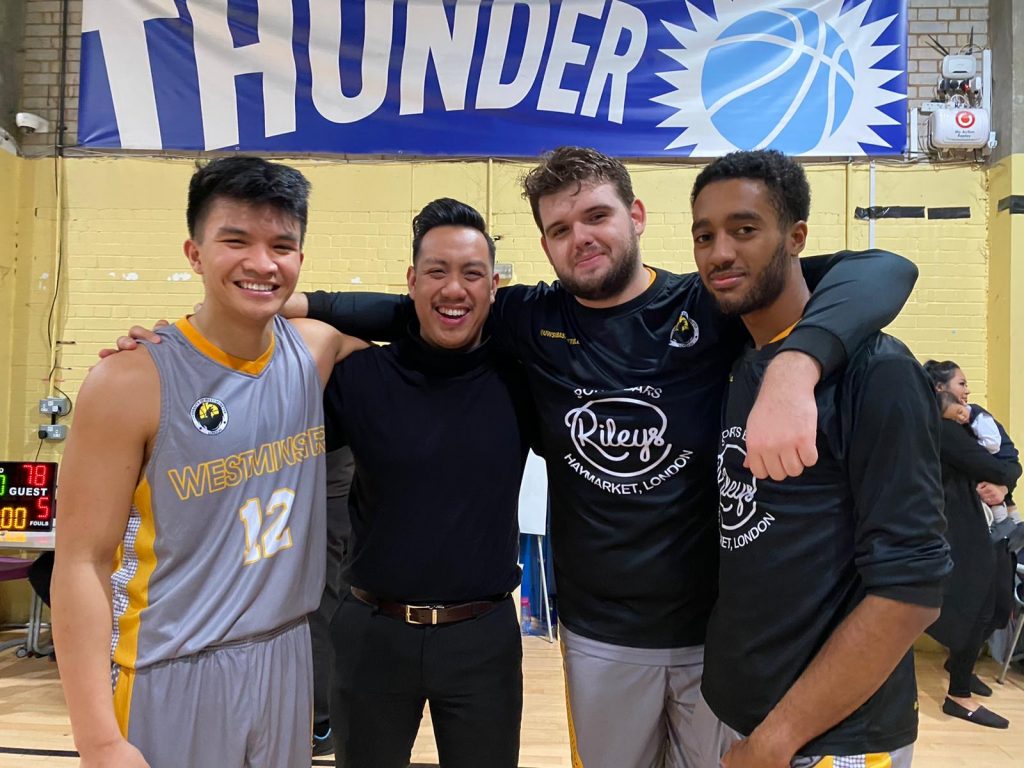 🐲 Westminster Dragons (6-3) fall to Haringey Hawks on the road 107-99. A positive 1st Quarter from the Dragons as they took a surprising 23-27 lead with only 6 players, however, Haringey Hawks dominated the 2nd through full-court pressure and easy transition points. Despite a positive 3rd quarter, the Dragons were always chasing and couldn’t overcome the Hawks who complete the sweep this season over Westminster.

🐲 Westminster 2nd (3-6) get a must-needed 52-53 win against SOAS 1st to secure safety from the relegation zone in BUCS South-Eastern Conference 4A. In a close contest, the Dragons found inspiration through American semester-abroad student Grant Lutzwig who hit back-to-back three-pointers to win the game for Coach Joshua Klein and the Dragons.